The ASPACE young men and women enjoyed a frantic match between the Innova-tsn Leganés girls and the Campus Promete from Logroño.

Last Saturday 26 February the charity match between these two teams was played with the aim of supporting and giving visibility to the ASPACE Foundation. Club Baloncesto Leganés returned, once again, to support and work for a solidarity cause with Innova-tsn since, like every season, the Club makes basketball the best way to collaborate with different entities. The ASPACE Foundation is a movement of people, families, professionals and organisations specialised in providing the appropriate services and support for people with cerebral palsy at every stage of their lives.

The evening was marked by the solidarity and sportsmanship of its protagonists; the young people of the association, the committed players and all the attendees. Thanks to all of them, it was possible to make this initiative a reality. The match, in turn, rose to the occasion with a close score until the end of the game. The first quarter began with continuous exchanges of points by both teams, although finally, with three minutes to go, it seemed that Campus Promete managed to take the lead. The pepinero team, however, did not throw in the towel and managed to win the first quarter with 18-17 on the scoreboard in a game that, as expected, was going to be an equal struggle between the two teams. The second quarter was slightly dominated by the home team, who managed to reach half-time 30-25.

It was a special half-time, because both Agustina Borrás, president of ASPACE Madrid, and Javi Martínez Fernández-Aceituno took the microphone and spoke, explaining the importance of sport in life and the value it generates in people with cerebral palsy. They did not fail to thank Innova-tsn Leganés for such a commendable initiative, where all the proceeds obtained from the tickets and the contributions made through Row 0 were entirely destined to the Association. Agustina Borrás concluded:

“Sport is an essential activity for people with cerebral palsy, not only does it keep them active, but it also helps them socialise, mix with the people around them, and develop skills that improve their quality of life. Generosity is one of the values that sport also promotes and this is what the Innova-tsn Leganés players have shown by organising this match. We hope that many people will come and join us that day”.

After the half-time, the girls from La Rioja took the court with a greater intensity that led to the final quarter with a tight 42-43. The last quarter of the game continued with the same tone of the match, a tight score and a lot of desire to win from both teams. Despite the advantage of Campus Promete, the girls of the team coached by Evaristo Pérez did not give up until the end of the game, the girls from La Rioja won the game by a tight 57-65.

Saturday ended as an unforgettable evening for the ASPACE young men and women and those attending the game and, although the Campus Promete girls took the victory to the capital of La Rioja, the girls of Innova-tsn Leganés gave their all and left with a standing ovation for their excellent performance. All those present took the victory

TEAM, TALENT, EFFORT AND PASSION FOR THE SAME COLOURS. 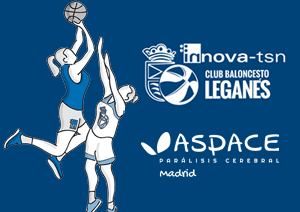